Creating a compassion revolution in Asia

Pei Su, founder and CEO of ACTAsia, is a pioneer. When she started her career in Taiwan, Su first volunteered with young offenders, then advocated for victims of domestic violence and later campaigned for prison reform and environmental causes. While marching for the environment in Taiwan in her twenties, Su realized nobody was speaking up for the humane treatment of animals. At the time, Taiwan had an atrocious animal rights reputation in the world, including millions of stray dogs roaming the streets of Taipei. For Su, it was never a love for animals that compelled her, however; instead she saw how caring for animals is meant to be an integral part of a whole and humane society. 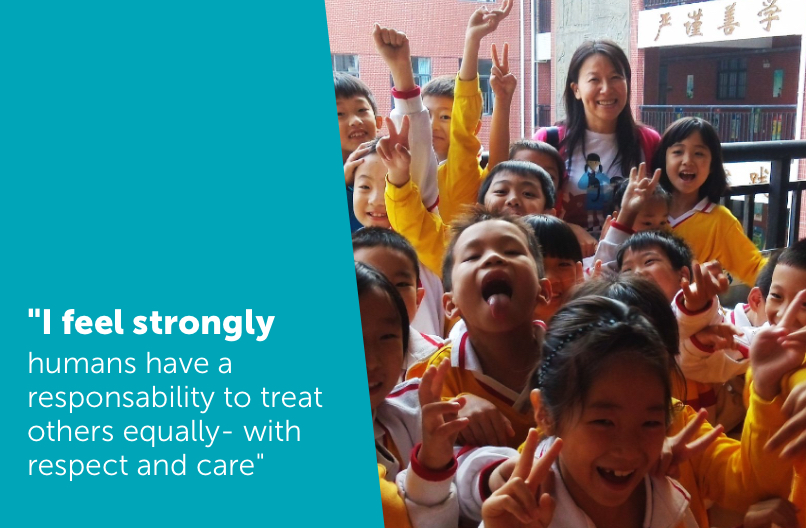 “I feel strongly humans have a responsibility to treat others equally—with respect and care,” says Su. “I had an awareness of our interconnectedness at a very early stage.”

After joining a brand new animal protection organization in Taiwan in 1993, Su spent the next several years on campaign after campaign, working towards a shift in consciousness and the humane treatment of animals. Major achievements included the historic passing of the Animal Protection Law in 1998, as well as amendments to the Wildlife Protection Law. Finding herself on the verge of burnout, Su decided to take some time away and travel, while learning from international animal protection organizations. She also began shifting her focus to China.

In 2006, Su co-founded ACTAsia, believing that “respect for people, animals and the environment will lead to a more compassionate and sustainable world.”

It also marked a shift in approach. After years of being campaign-driven, Su was ready to take a long view and create societal change for the long haul. Becoming a mother certainly influenced this too.

“After I had my own daughter, I was shocked about the importance of the role of educators—parents, teachers, even their friends,” says Su.

Education became a key focus. Su wanted to be part of educating a new generation of adults who would understand their role as global citizens and who would maintain the empathy they are born with as kids.

ACTAsia worked with a specialist to develop an innovative curriculum, built around UNESCO’S four pillars of learning. They developed a six-year-program, so it could easily be integrated into a school curriculum.

Su is deeply concerned about the increasing challenges kids face in our world—from bullying and mental health to coping with the loss of nature and climate change. She wants to give students the tools to make informed decisions; decisions that are grounded in moral judgement and understanding their connectedness in the world.

“Teaching our children to be global citizens should be as important as learning Math, Science or Literature,” says Su. 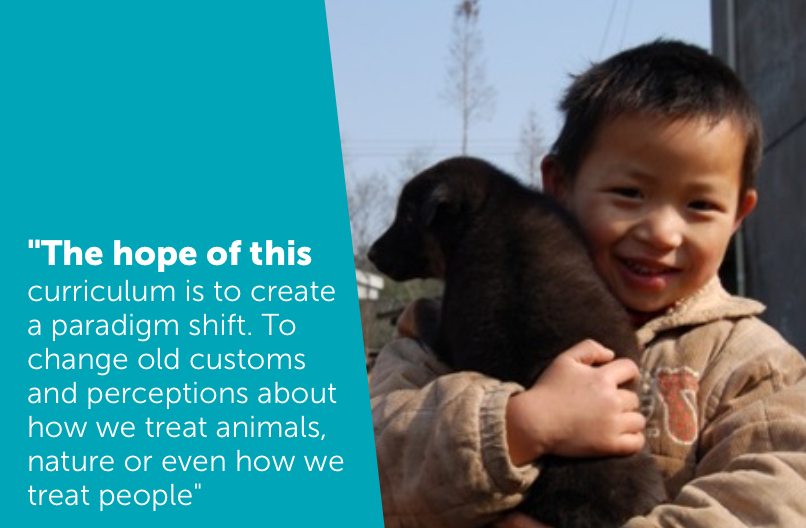 “The hope for this curriculum is to create a paradigm shift. To change old customs or perceptions about how we treat animals, nature or even how we treat people.”

She adds: “I believe we can change behavior through education.”

A recent story showed they are doing exactly that.

THE BOY WHO WOULDN’T EAT TURTLES

Recently a mom came up to Su and told her about the impact the curriculum had on her son and how he created a change in their family.

The young boy was pretty skinny and small and his dad was concerned about his health. One day the dad brought home a bucket with turtles, so the boy could eat turtle soup. In Asia, turtles are often associated with long life and strength.

When the boy saw the turtles, however, he thought his dad had brought them home to be his pets. Excitedly he asked: “Can I keep these turtles? Can I name them?”

But his dad said, “No, we are going to cook them for you, because you are so skinny and so small. You should eat them to make you strong.”

The boy answered: “Please, don’t. This is just so cruel. This is not what we should be doing. I don’t need to get stronger by eating wildlife.”

Instead, the boy suggested he would eat more vegetables and in the end, he was able to convince his dad.

“This is the change we want to make within the society,” says Su.

We don’t tell kids not to eat wildlife, she adds. “We’re not teaching the kids to say, ‘This is bad.’ Or, ‘This is wrong.’” It’s common to have a campaign telling people not to do something. “We believe it’s important for the kids to make their own informed decisions.”

Instead, they teach compassion. “We are teaching kids that animals are sentient beings. Animals have feelings.”

The Caring for Life curriculum teaches kids to understand their connectedness to each other, to animals, to the environment and to the rest of the world.

Recently Suzhou University of Science and Technology (SUST) made the Caring for Life course an official component of teacher training.

“Our hope is that one day this course can become part of the compulsory National Education as well. That is our long-term vision.”

In the meantime, there’s a lot of work. In some way, she’s simply scaling what they already did in Taiwan.

One of the biggest hurdles, then and now, is shifting towards an understanding of animals as sentient beings.

The word for “animal” in Mandarin is “dong wu” and literally means “moving object.”

Su remembers, even in her own home growing up, how animals were basically treated as “moving objects.” As a young girl in Taiwan, she didn’t understand yet that animals feel pain and needed to be treated with respect. Nobody had told them any different. 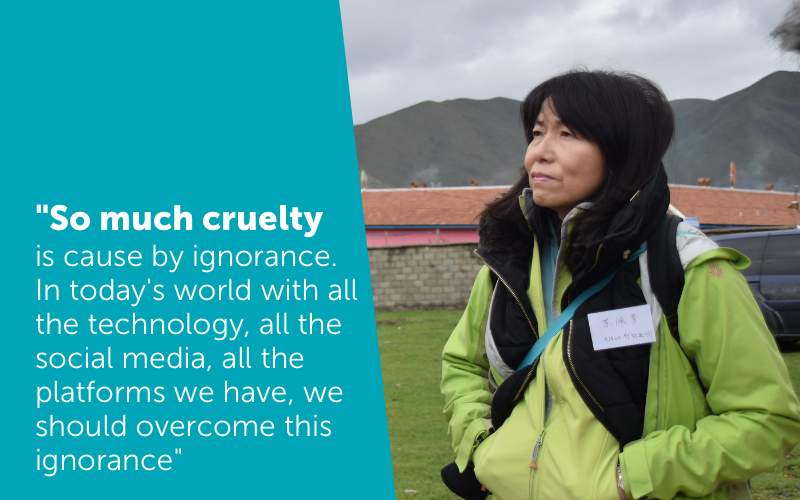 Once when she visited an aunt in the countryside, she noticed how her aunt’s cat had been injured. When she asked about it, her aunt said the cat must have tried to steal food from one of the neighbors’ open kitchens. Someone had poured boiling water on the cat. When Su heard about the treatment of the cat, it didn’t occur to her at the time that it was cruel. A cat was still nothing more than a “moving object.”

Now her cats move in and out of screen, a special part of her life.

“So much cruelty is caused by ignorance,” says Su. “In today’s world, with all the technology, all the social media, all the platforms we have, we should overcome this ignorance.”

ACTAsia endeavors to do that and so much more. The organization is built around three core ideas: Action, Compassion and Together.

“If you want to change the world, and overcome the issues, it’s not just by talking,” says Su. “You have to do something.” For her, action, just like in their name, is the first thing and it is motivated by compassion. 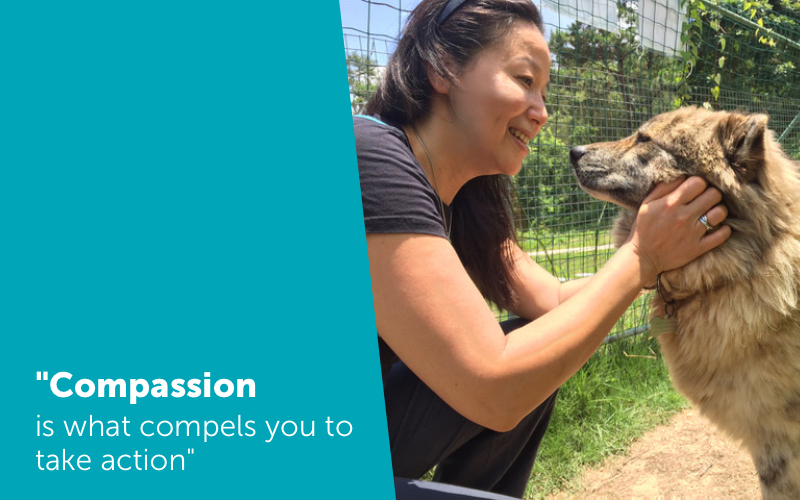 “Compassion is what compels you to take action,” she says.

After nearly 30 years, working for social causes, Su knows there is no room for lone rangers. “In my experience, you can’t change the world by yourself.” The challenges are too big, she adds.