“My first CNN interview! I know I sound strong, but I am angry and want to shout out loud to stop this cruel practice. However, I have learnt that shouting and screaming at the Chinese won’t change anything and #education is the key to solving the challenges and the tremendous animal suffering that we are facing.”

This is the post that I sent out on social media after my interview with CNN last week surrounding the shocking craze called ‘blind boxes’. I want everyone to know about this cruel practice and I am thrilled that CNN is giving the story exposure and championing the work we are doing at ACTAsia to put an end to this animal suffering.  ‘Blind boxes’ are small brown innocuous looking boxes and contents inside could be a toy, a game but in some cases, it is a live animal.  Companies selling these boxes are hoping to lure customers with the promise of a live animal or even a pedigree cat or dog.  The boxes are sold in person and online and shipped by couriers. The sellers behind the craze are including live animals in the boxes to heighten the anticipation of ‘winning’ an animal. 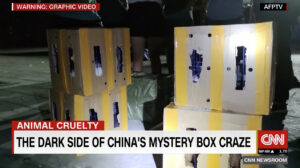 But what many Chinese people don’t understand is the suffering and cruelty behind this practice – animals are not an expendable toy or gadget such as a game or a mobile phone.  In a society where animals are seen to serve humans for basic needs such as food, clothing, entertainment, or experimental purposes, it can lead to many Chinese being incapable of sharing empathy towards animals.  In my own childhood experience, and in today’s society, kids are often given negative or incorrect information about animals and the messages surrounding animals’ basic needs and care are neglected. Seen more as an expendable commodity, the animals in the boxes are viewed as a novelty to win in order to drive ‘player’ numbers.

There is little consideration for the needs of the animals trapped inside these ‘blind boxes’.
In addition to the animal welfare issues there is also major concern surrounding ‘zoonotic diseases’ which spread easily as multiple boxes containing animals are transported in cramped conditions which threatens public health and safety. That’s why ACTAsia has developed the world’s first six-year Caring for Life Education curriculum, so children can learn the fundamental life skills of empathy, compassion and responsibility for people, for our planet and for all the species we share our planet with. Through this program children are learning that animals are sentient, just like us.

I admire the growing number of compassionate locals in the Chengdu and Suzhou who helped stage a rescue mission for these animals on 3rd May and who are helping to raise awareness in China.  Locals intercepted a cargo truck owned by ZTO Express filled with more than 160 cats and dogs in downtown Chengdu in the Sichuan province.  Shockingly, on arrival almost all the animals had died in transit. Malnutrition, dehydration, disease and suffocation all being factors in these animals’ death sentence. The courier company ZTO Express was sanctioned yet on 11th May another shipment from that company was discovered in Suzhou in Jiangsue Province. 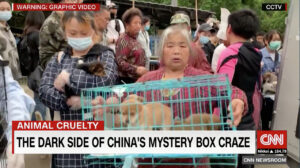 Raising awareness about this inhumane practice is the first and most important step in educating the public and children about the dangers of shipping live animals. People in China are not intrinsically cruel, but many of our people do lack the essential understanding that fundamentally these animals are not products, or objects – that they have feelings – and people need to learn the importance of seeing these animals as living beings.

It is encouraging that a petition has been set up by the growing numbers of Chinese animal lovers, to demand that the government put an end to this cruel ‘blind box’ practice within the country but we need to go further – we need to do more. The answer lies in education which is the long-term solution to changing people’s perception, their attitude towards animals and our relationship with nature. ACTAsia promotes the need to focus on education and training. We want children and consumers to understand that animals are living beings, and that our consumer behaviour needs to be ethical, and that we have to address animals’ needs.

In my interview with CNN, I explained that in addition to educating the next generation, legislation on the e-commerce platforms needs to be tightened, and government authorities – from the central government to the local government, to the State Bureau – all need to work as a team to address these issues to tighten the regulations, and also to punish the people who continue to push this ‘business’.

However, until these changes can be enforced, compassionate carers on the ground in the towns where the boxes are appearing are left to look after these sick and dying animals. Without the paradigm shift and change in perception through education, we can’t address the root cause and we risk further incidents occurring. We must do more to help save these animals and change attitudes for good.