Notes from webinar 5: Legislation and enforcement; can farming wildlife help to protect species in the wild?

How are endangered species farmed and used in China? Is there legislation to protect them? What does law enforcement around protecting these species look like, and what should it look like? 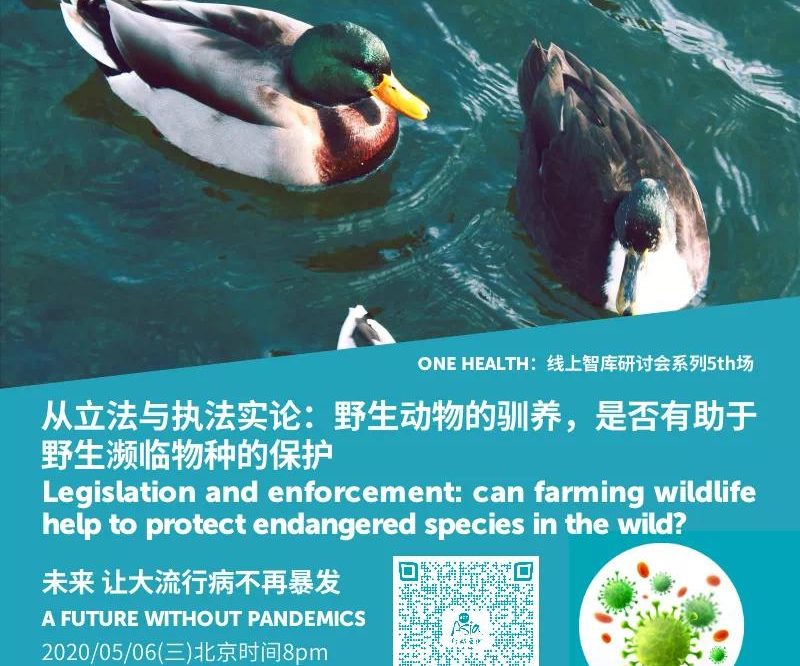 The proposal for a revised list of livestock in China includes mallards and pheasants, which are wild species. What are the consequences of farming wild species on wild populations? Is there a difference between ‘wild’ and ‘farmed’ in China? Is there legislation to protect them, and how should the law be enforced?

Justin Gosling, Independent Law Enforcement and Criminal Justice Specialist, with professional insights into the illegal wildlife trade will bring his unique expertise around whether farming wildlife can help to protect endangered species in the wild, and associated legislation.

Liu Hui Li, Executive Director of Let Migrant Birds Fly Fund, is an environmental journalist with inside knowledge of species protection and animal welfare. She contributes to the discussion around legislation to protect wildlife, and the role it plays.

Liu Yi Dan, Senior Bird Protection volunteer, established the Yidan Wild Protection Team in 2007, when she began exposing the capture of wild birds, and releasing them back into the wild. Her work across China has attracted much media attention, and as a result of her findings, the Jiangxi Provincial Government upgraded the Poyang Lake’s winter migratory bird protection measures, and a game-ban area was implemented in Tianjin. Dan’s work has been recognised by many conservation organisations in China.

Notes from the webinar

Liu Yi Dan:  In these years I have been at over 20 farms and what I have seen is that there are serious problems of claiming they have farmed birds but actually they are poached, not just mallards and pheasants but also protected animals – whiteheaded ducks too. They are afraid they will fly away so there are huge nets. Some of the ducks have their wings cut off. As long as they have a licence to breed, even though we know they are wild ducks, they have a permit, and law and enforcement cannot be done. We know there are bans on eating wild animals and this way Ministry of Agriculture have somehow turned mallards and pheasants into livestock. It opens another channel that opens possibility and extremely bad for public health.

Iso: I’m curious about the nets to prevent the birds from flying away? Justin: are the other species where this is a similar situation?

I haven’t seen nets, but I will put into context the trade and way wildlife is used. Similar to mallards and pheasants. There are five uses of wild animals listed in China: food, fur, entertainment, medicinal, experiments. Most of the trade is financially motivated to make money for farmers and traders. There are hundreds of species in the same situation – some come from farms, some caught from wild. Secretary general of CITES said there is a difference between regulated and unregulated trade in wildlife. In theory that’s true, but in practice it’s a grey area and difficult to find legal elements and there is criminality running through the trade. It’s a vast problem and we’ve become accustomed to criminality, but it’s comepltely unacceptable and we should be less tolerant of what is a poorly legislated and poorly enforced industry.

Liu Yi Dan: It’s a very serious problem – every August 15 we go to coastal area near to cities to see. Sometimes within a lake we see dozens of duck fences – a traditional way ofcatching ducks, electronic sound to attract birds, once the birds have landed and are floating on surface of water, they are covered with nets. The ducks squeak and quack to attract attention first and other birds join them, and then the poachers pull the string to close the nets. Many caught are mallards and spot billed ducks, and both quack a lot to attract others. After they are illegally caught they put them into farms which are legal – to sell to the entire nation.

Iso: What you’ve shown is some of the videos seen before. I am finding the videos troubling. Iso shows the video of how poaching takes place in the wild. Other birds get stuck – including Class 2 protected animals, including raptors. So many farms are illegally poaching birds. In markets people are openly purchasing animals. Law enforcement was nowhere. Many places openly accept wild-caught animals – shows mammals and birds being bought and transferred and then sold at markets, birds trapped in nets. Some freshly caught and sold soon after catching. As pets or for food.

Lui Hui Li: farming mallards and pheasants – what was described, 3,000 wild birds were caught and claimed to be captive, many had their wings cut off and the ducks are swimming in such a drastic situation. These are migratory birds. When law and enforcement came the farmers claimed they were farmed. We have conern over the livestock list and wish the Ministry of Agriculture would consider this. We wish law enforcement to go to the very end of consumer chain to see how they are consuming. I secretly visited markets in Shanghai – an urban modern city – and was told yes, book today and you can have them tomorrow. If we keep farming legally then the market stimulates the poaching, and as you have seen we cannot make sure there are law enforcement agencies by poachers, and we don’t have effective systems to monitor. So the only way to prevent poaching from happening is to remove wild animals from livestock list and make sure that wild populations don’t get affected.

Iso: Would captive farming of wild animals protect the populations in the wild?
Justin: It sounds like a valid question and seems logical that if animals were farmed it would satisfy demand and there’d by no reason to catch wild. But it’s not the case and this is why:

Liu Yi Dan: Many law enforcers can’t even recognise species of birds, they can’t do it without volunteers. Only when we get there we can tell the law enforcers – this is wild, this was farmed etc so in past years we see that often, and pass our knowledge about laws and scientific knowledge so they can react.