China has been gripped by a new type of reality TV show. But who are the stars of this must-watch TV show? Models? Celebrities? Sports personalities?

No, the unlikely stars of the show are a herd of elephants who have captivated the nation. More than 8 million Chinese viewers have been glued to the travels of 15 elephants who have been making their way to northwards from the border of Myanmar and Laos. They have already trekked more than 500km after leaving a nature reserve last year in search of food shelter and water as the nature reserve could no longer sustain the family. And this is not an isolated incident as at least three other elephant families have fled in search of basic needs. 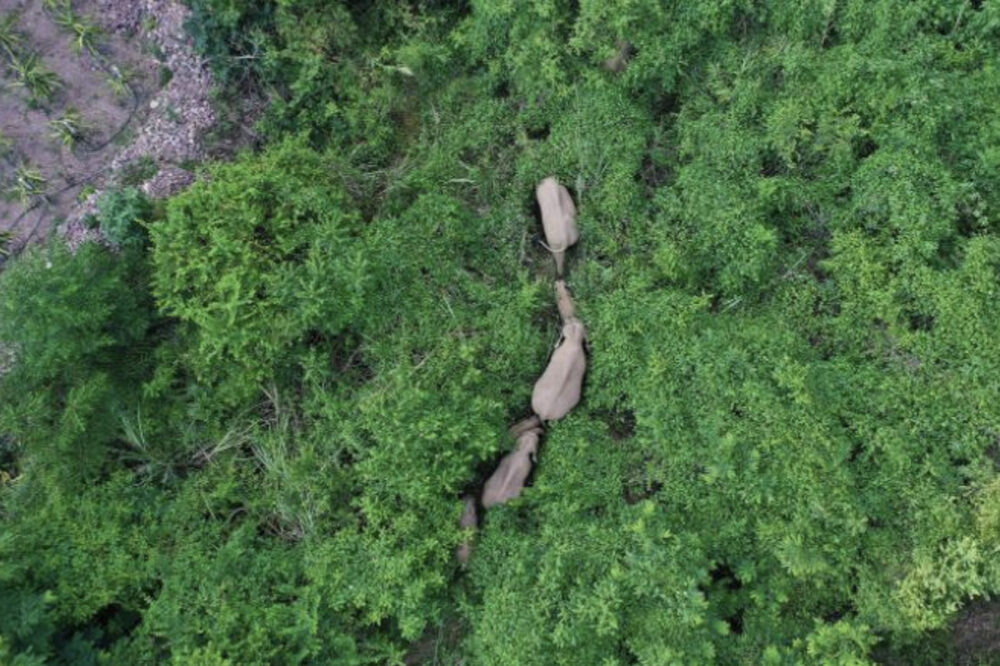 The elephants are being followed by more than a dozen drones. Their daily sleeping and eating patterns are closely followed as the pictures of the elephants – and the calves in particular – ooze the cute factor. However, this is not migration as many would like to believe.  Elephants characteristically do not migrate with young – this herd has been forced from their habitat. However, glued to their screens, viewers have been particularly charmed by one calf who was born during the epic journey and another clip went viral that showed a calf who found itself stuck under an adult elephant during a group nap. Viewers also took to their social media pages to share clips showing the baby elephants clumsily tripping as they followed the herd across a field and a calf plunging head-first into a pool as it attempted to gulp down water. With such images being beamed into the homes of millions it is no surprise that the nation has been gripped – but for the wrong reasons. 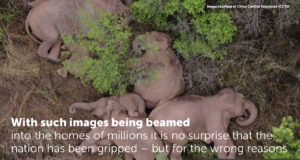 However, despite the obvious ‘cute factor’ the elephants have caused extreme damage to local communities. Authorities have been trying to keep a distance between the elephants and local residents, by blocking roads into villages and seeking to lure them away with food drops. Despite that, the herd of 15 have raided farms, strolled down urban streets and foraged for snacks in villages and even a retirement home. More than 410 emergency personnel, 374 vehicles and 14 drones were deployed one day with more than two tonnes of elephant food, in an attempt to lead the elephants away from human areas, and to evacuate people in their path. 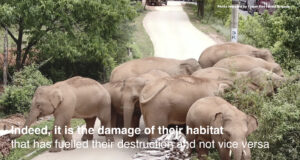 Many rightly argue that the cost of monitoring the elephants, putting in blockades and luring them with tonnes of food could have been better spent in maintaining and protecting their natural reserve. Indeed, it is the damage of their habitat that has fuelled their destruction and not vice versa. It is likely that their habitat was victim to the rubber trade as vast swathes of land are cleared for profitable plantations.  Using national reserves for agriculture needs to be addressed to stop China witnessing more scenes like these.

Social Media Stars fuelling the fascination – and damage to their habitat

However, what is clear, is that sensationalising wild animals in this way is damaging to the animals and their natural habitat. Shockingly, internet stars have tried to ride off the back of the elephants’ celebrity with various stunts. According to Global Times, social media wannabe’s raced to get their hands on the leftover corn and pineapple that the authorities had used to lure the elephants away from cities. Videos posted online showed the internet stars picking up and eating leftover pineapple to attract viewers – and of course boost their social media followings. This has demonstrated the lack of understanding as to the true plight of these animals as their journey is being treated as a hyped social media diversion. 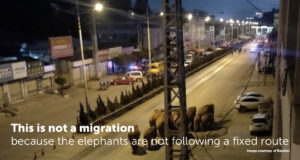 Loss of habitat to blame?

Scientists are unanimous that this is not a migration because the elephants are not following a fixed route. The elephants are homeless refuges searching for somewhere they can survive and meet their needs. Officials claim that It remains unclear as to why the elephants embarked on their trek but deforestation, fragmentation and being squeezed out of their home are surely many of the reasons responsible for this unchartered trek.  Urbanisation and deforestation have reduced habitats for elephants worldwide so it is clear that they have been looking for a new home with better access to food – noting that elephants eat 150-200kg of diverse food a day. Biologists see the situation as a warning sign of what happens when elephant habitats are degraded. Over the last few decades, agriculture has led to a loss of elephant habitats, leaving herds fragmented. Many elephants are forced to forage for food in agricultural areas – which were once their home – leading to a rise in human-elephant conflict in the last 10 years. This is something authorities are keen to address. Where there is pressure for land then conflict is guaranteed to arise. The only way to prevent a future elephant exodus is to restore their habitats and protect natural resources.

Keenly aware of the impact of captivity on such gracious beasts, the UK is preparing to pass an animal rights bill that includes a series of protective protocols for elephants.  These will include keeping elephants from being placed in captivity in zoos and safari parks. Presently, there are 51 elephants living in captivity in 11 different zoos in the UK. The elephants that are currently in zoos will be permitted to live out their natural lives once the bill passes and there will be no elephants bred or captured to replace them. Natural animal behaviour undergoes a myriad of concerning changes under captivity and this is something that needs to be addressed worldwide. In 2002 the RSPCA published a report into the welfare of elephants in zoos in the UK which uncovered a raft of worrying issues. Health was compromised, behaviour was far from natural and coping with the altered environment induced enormous stress in these mighty beasts. 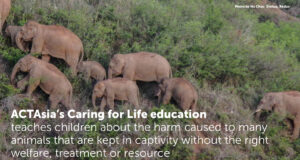 What is ACTAsia doing to help animals in captivity?

ACTAsia’s Caring for Life (CFL) education programme teaches children about the harm caused to many animals that are kept in captivity without the right welfare, treatment or resources.  ACTAsia works closely with primary school children across China teaching their unique six-year CFL program. It encompasses social welfare and citizenship, animal welfare and environmental issues, and recognises the interdependence of all living things. The programme teaches children to develop empathy for all sentient beings and understand interconnectedness.  ACTAsia also run a Little Vets programme which brings together professional veterinarians and children, to help children understand the importance of welfare for all sentient species. ACTAsia’s teaching in schools about ‘The Web of Life’ and the elephant family is a perfect example of what happens when we disrupt the web and remove something the animals need. Teachers have been using this example to teach children about creatures that are not typically seen as interesting – such as insects and frogs – but which are wiped out by plantations and pesticide use resulting in loss of national and global biodiversity.

ACTAsia hopes that the story of the elephant internet sensation will inspire many more children to engage with the Caring for Life and Little Vets programmes as they consider the natural place for all animals on our planet and how that natural habitat needs to be preserved for future generations of wildlife. As a nation we all need to take greater responsibility for our actions and the consequences that these have on global wildlife and biosystems.

Through your kind and generous support, ACTAsia have initiated Caring for Life Education programmes for gradual and sustainable change in Asian societies.  Please help us expand our network to even more societies by donating today.